Pieter Verlinden (1934-2002) was an exceptional composer responsible for hundreds of scores and soundtracks for television, ballet, theatre and film. Only some of his soundtracks were released at the time, like De 5 van de 4-daagse (The Five Are Marching In, 1974), Een mens van goede wil (A Man of Good Will, 1974) and De dood van een non (Death of a Nun, 1976).
Most of his work was only preserved on the original master tapes in his personal archive, so the majority of Verlinden’s music has never been heard and is unknown. With the album series The PV Tapes, 678 Records pays tribute to the maestro of Belgian film music.

On the second album in this series we present two complete original soundtracks.
On side 1 you will find the original library music recorded for the Dutch 1976 documentary Mensenwerk, directed by Richard Hock.
On side 2 you will find the complete home recordings Verlinden made on his brand new Oberheim OBX synthesizer for the 1980 television drama Een spoor van Carla, directed by Paul Cammermans

There are no reviews yet.

Only logged in customers who have purchased this product may leave a review. 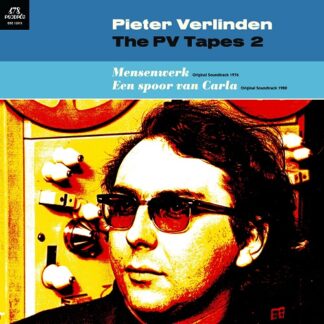